Organisational structure of the Department

The Kerala Mineral Exploration and Development (KMED) Project with the Director of Mining and Geology as Ex-Officio Project Director was established with UN assistance in April, 1977 for carrying out detailed exploration programmes. The staff required for the Project were deputed from this Department. The acute dearth of staff by re-deployment of staff during creation of KMED Project was alleviated by strengthening the Department in 1980 by establishing 3 District Offices one each at Thiruvananthapuram, Kollam and Palakkad. Another District Office was created and started functioning at Kasaragod in 1987. A Special Office at Cherthala was also established in 1990 to estimate the reserves of Silica Sand in the leased out and free-hold lands in Cherthala taluk, to issue movement permits to remove the minerals and to curb illicit mining and clandestine movement of silica sand and to take legal action against offenders. Two teams of squads known as Kerala Mineral Squad (KMS), Southern Region and KMS, (Northern Region) were formed in 1985 and 1990 respectively by deployment of the existing staff in the Exploration and Prospecting Division of this department. Six new District Offices were opened in Kottayam, Pathanamthitta, Idukki, Thrissur, Malappuram and Wayanad covering the then existing four Regional Offices at Ernakulam, Alappuzha, Kozhikode and Kannur (GO(MS)119/97/ID dated 28.7.97) during the year 1997.

In short at present this Department has in its fold 14 District Offices and 3 Kerala Mineral Squads. The Department has 58 geologists and 4 chemists for mineral exploration as well as mineral administration activities. 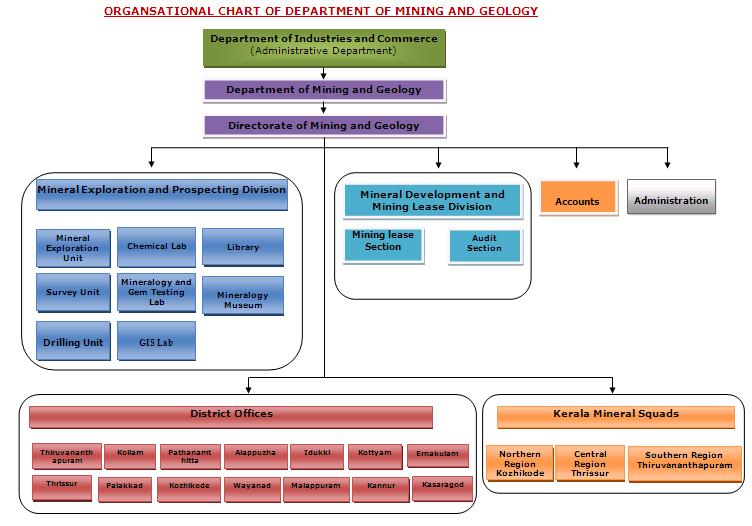 The Department has two divisions viz. Exploratory and Prospecting Division and Mineral Development and Mining Leases Division for carrying out its main functions and activities.

The Exploratory and Prospecting Division is engaged in the mineral exploration activities to find out new economic mineral deposits, to assess their reserves duly taking into account mineability and related matters to pave the way for new mineral based industries and for sustenance of the existing industries utilizing minerals as their raw materials (e.g., .Malabar Cements Ltd., Travancore Cements Ltd., Kerala Ceramics Ltd., Kerala Clays and Ceramic Products (all Public Sector Undertakings)) and other Private Sector industries. The Mining Leases Division which is of regulatory nature is engaged in scrutinizing and recommending applications for grant of mining leases and prospecting licences, grant of quarrying permits and quarrying leases for minor minerals, inspection of mines and quarries, curbing of illegal mining and clandestine movement of minerals (both major and minor) preferring complaints in the Courts of Law regarding contravention of the provisions in the Mines and Minerals (Regulation and Development Act, 1957, the Mineral Concession Rules, 1960 and the Kerala Minor Mineral Concession Rules, 1967), taking adequate steps for protection of environment and ecology. Innumerous complaints are received in this Department which have to be speedily dealt with by the MD & ML Division. Revenue on the minerals by way of royalty, application fee, dealers licence etc is to be collected and remitted in the Treasury by the officers of this Division. Periodical auditing of accounts of the mineral concessionaries in the State are also to be carried out.

The department has a well established Chemical Laboratory. The Department also has a Mineralogy & Gem testing Laboratory dedicated to testing and certifying Gemstones as well as for detailed study of minerals. Recently the Department has setup a GIS lab with state of the art facilities. There are around 57 Geologists who ensure that the best possible Geological Investigations are carried out in the state. The Headquarters is located at Kesavadasapuram in Thiruvananthapuram , the capital of Kerala, approximately 7km. from the central railway station as well as bus stand and about 10 km. from the airport.